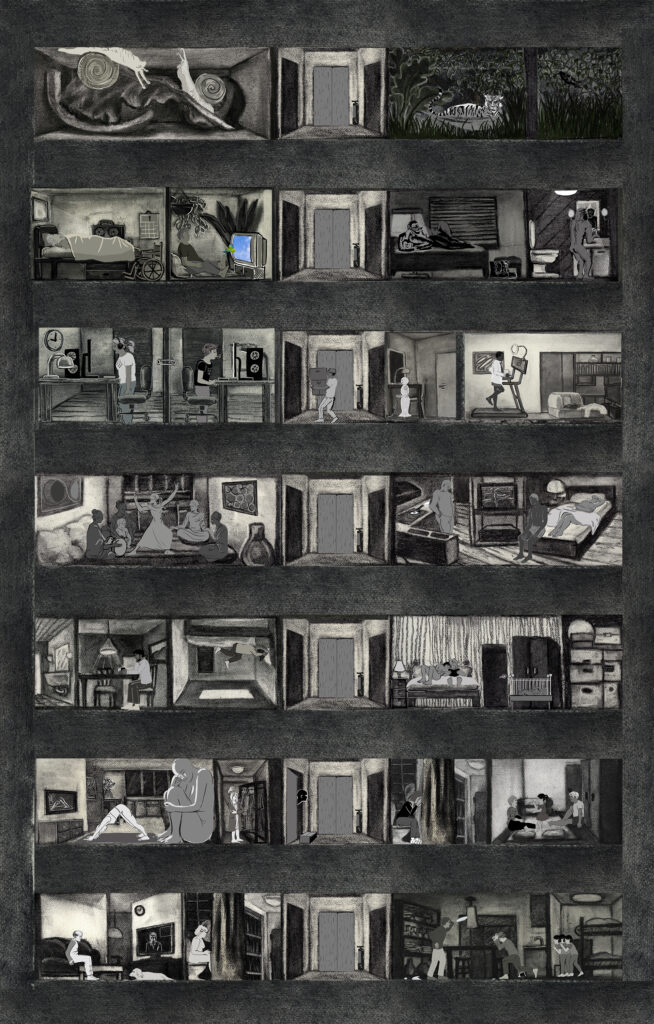 Most South Koreans live in cities, and most of those city dwellers live in apartment buildings. I grew up in different apartment buildings over the years. The first building I remember was five stories high. We lived on the second floor. I don’t remember who lived on which floor, but I remember there was a boy that I fancied living on the fifth floor. This building was destroyed during the course of urban redevelopment. Now, there are buildings that are thirty to thirty-five stories high standing in its place.

The second building that I remember living in was twenty stories high, and we lived on the nineteenth floor. My parents still live there. The buildings are numbered according to the complex to which they belong—there are more than twenty in each complex and fourteen complexes in the city I grew up in. There are two families on each floor, so there are forty families living in the entire building. Some apartment buildings have ten or more families living on each floor in smaller apartments. A long corridor connects each home.

The apartment building was never quiet. It always had new stories. There were comedies as well as tragedies. Once, a mother of three daughters started a fire in her own home after having a severe fight with her husband. The flame left black marks that reached the seventh floor. This planned accident made me think about “family” from a different perspective. This was not an isolated event though. There were nights when I woke up to the sound of someone crying, dishes breaking, and doors slamming.

Because there were so many families living in each building, noise was often an issue. Sometimes there were incidents where neighbors fought because of the noise level. There’s an inter-phone in each house. You can call the building manager, who lives on the ground floor of the building, to connect to other tenants in the building or report any problems. The building manager, whose job was to watch over this apartment building and answer the inter-phone disappeared with the emergence of automated gates and finger-print recognition systems. An elevator connects the floors and transports the bodies vertically. There’s also the under-used staircase. I still remember how each floor had its own smell and decorations.

The conception of Apartment 2022 came from these detailed recollections of the apartment building that I used to live, and the people living in it. It shows the parallel lives of different families in the building, showing the differences among the sameness of each floor.

Borrowing from my memories and imagining what might be happening behind the closed doors, I created different compositions of families ranging from nuclear family with mother, father, and children, to same-sex couples, and non-human families. By bringing all different forms of families together into one visual plane, I show the diverse forms of families, and how they coexist.